“The Plein Air Painting Boo Boo”
A couple of weeks ago I wanted to try out my new field easel, a variation on the thumb box idea I put together after looking at others I had seen.  So, I took a trip with my family to a parking area accessing the Legacy Trail, just off of the Legacy Parkway in Davis County.  Here we had a panoramic view facing west, taking in a nice distant view of the marshes of Farmington Bay and the mountains of Antelope Island in the distance.  There I began the painting.  It turned out to be a great thing to have my family there to chat with and keep me company.  This parking area was on a hill, and it gave us a nice high vantage point as we looked west.
In the fields right in front of us we became engaged in a struggle between human control and bovine rights, as a couple of teen-aged boys chased a young bull they were trying to separate from a herd of cows being kept in a pasture.  One was on a four wheeler, and the other on foot.  They appeared to be trying to get the bull into a holding pen at the far north end of the pasture.  After an hour, and a couple of collisions between the four wheeler and the horns of their would be captive, they had to give up.  We cheered as the bull trotted off in tired triumph joining the herd, while the boys sped off, most likely to tell dad of their attempt and failure.  At that point I felt that I had enough of an image to work with back in the studio at home and closed up the easel.
Now, I designed this easel so that when it was in its closed position it would hold a painting on one side, while the palette was just an inch away from the face of the painting on the other side.  Both secure in their place and safe from touching each other, all for the sake of quick take down and easy transport.  Can you see what’s coming?  Sure enough, as soon as the easel was closed the painting slipped from its hold and landed face down on the palette below. 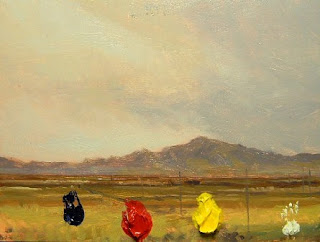 And here we see the result.  Now, as a young student it might have been enough to kill the whole thing for me.  I would have just tossed the panel and maybe the field easel in the garbage and sulked about it for a few days.  Perhaps my family, at that gut wrenching moment, was thinking that I might just do exactly that.  But no, I’m an older, wiser, and calmer person now, more centered and at ease with life and its little ups and downs…really! 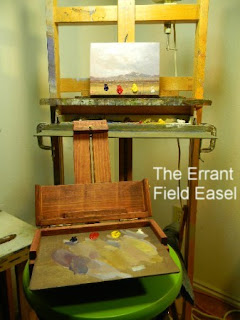 The task now was to save the image.  I scraped off the extra blobs of primary colors, and let the painting sit for a few days to dry.  Then, I lightly sanded it with fine grit sandpaper, re-oiled it, and began a whole new painting by essentially restating the image. 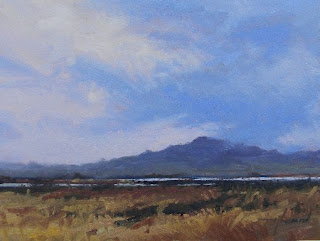 Oh no! That is so funny! Glad you were able to fix it!

Tom Howard
I'm a painter of the landscape and always will be. Oh, the occasional still life or wildlife image does make an appearance. But its the landscape that counts for me. As for the fisherman, my worst day of painting is better than the my best day in the office, and any day of plein air painting is better than all the rest. However, because of the logistics of packing everything up and taking time away from job, home, and family, this to has to be carefully managed. So it is with all of life, it all has to be carefully managed. I'm a son of the American West. It's landscape is an indelible part of my sense of place and environment. Not the old romantic west, mind you, but the west of modern times, with still open and truly grand vistas encroached on by urban sprawl, Mac-Mansion's, and endless Taupe colored planned communities. But still great beauty can be found, and I intend to find as much of it as possible.